macSVG supports the interactive creation and editing of SVG <path> elements in the web view, and with several plug-in editor panels.  A path can be used to draw a shape, but is also useful for several other SVG features, such as aligning text on a path, used with an <animate> element for path shape morphing, used as a motion path with the <animateMotion> element, as a clipping boundary for elements and images,

The path Element Editor contains controls to edit each segment of the path, so it is possible to create a path that contains several different kinds of segments, as shown in this SVG document:

(The “Close Path” segment type is not shown in the example, and the “Freehand” segment is actually a SVG Quadratic Curve.)

This video demonstrates drawing a <path> element based on cubic curve segments into the web view:

While drawing the SVG path segments, the segment kind can be modified with a pop-up menu: 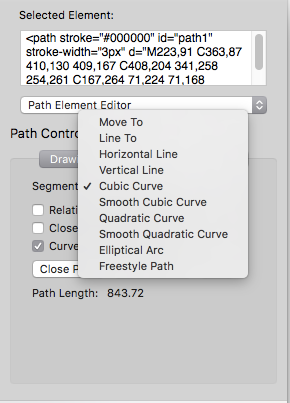 After a path element is created, it can be edited in the web view by selecting the Crosshair Cursor tool.

The path segments can also be viewed and edited in a table view: 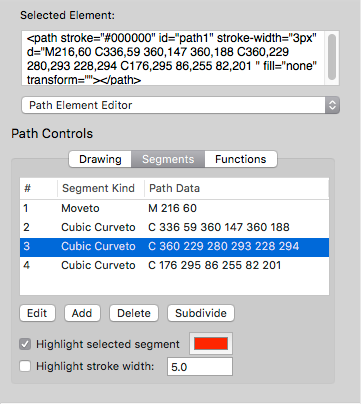